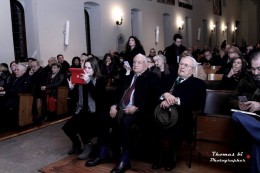 January 19, 2015, a beautiful moment, heard and exciting, lived in this day in the beautiful Basilica of Santa Chiara, which houses the tombs of the Kingdom of the Two Sicilies Royal. Event organized on the occasion of the 90th anniversary of the death of Queen Maria Sofia Wittelsbach, by Prof. Erminio Di Biase and by the Committees Two Sicilies. Before it was celebrated the Mass, there was gathered in Maria Cristina room, to commemorate together the august late Queen, wife of King Francis II of Bourbon, the last King of the Kingdom of the Two Sicilies.
As previously announced, on this occasion, guests of the Committees Two Sicilies, a socio-cultural identity movement, which wants to regain possession of their historical memory to restore the southern people of their dignity and get him out of that state of minority and inferiority to which was forced dall'atroce suffered colonization, we wanted to officially establish the Foundation "Francis II of Bourbon" 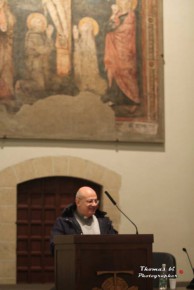 What more beautiful and significant moment. As she remembered her who torments and even among difficult situations was "the most authentic partner" of the unhappy King, the one who stood beside him in the tragic days of Gaeta, the one who intimately picked up the drama and the desire to be levied, and who embodied in his own heart, the one who has collected the last sigh of Francis II in that distant land thirty, precisely on this occasion to begin this extraordinary work, he wants to embody in itself the high ideals of King Francis II of Bourbon, and that have been transmitted in the same logo and the Statute, the Foundation want to commit to living.

In the footsteps of Francis II of Bourbon, the founders of this reality, and all those who want to follow the ideal, will commit themselves to live the spirit of identity of this sovereign, who never denied membership to this our Land of the Two Sicilies , to embody and live out his yearning for culture, faith, solidarity and charity. 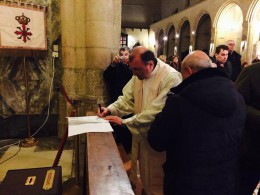 At the conclusion of the Mass, right on the King's tomb, excited and moved, the Founding Promoting Members, have signed the Act of Constitution of the Foundation "Francis II of Bourbon", feeling beside the presence of all of you, that you love Augustus King.

There are many projects that the Foundation aims to realize, with the help of God and the intercession of the Virgin Mary, the Blessed Maria Cristina and the virtuous King Francis, and even the heroine of Gaeta, Maria Sofia, who together and next to her husband became the helper and comforter of our people. But even with the help of many, just collecting the example and memory of Francis II, will want to join the Foundation. 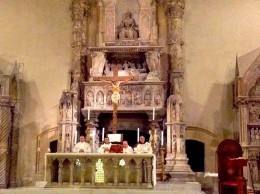 Of course, with no selfishness or closing, but only picking up the legacy of Francis II, no unbridled zeal or turbulence in harmony and peace, strongly united to those who sought and is precisely the continuity of this heritage, did this Foundation. Anyone can join and cooperate with it, the desire to follow the Statutes, which will be incorporated into this board, so that everybody can look at closely.
Our hope is that there are no unnecessary controversies and conflicts, but serenity in the move towards a "dream", which we know is shared by others, and that together we hope to accomplish. 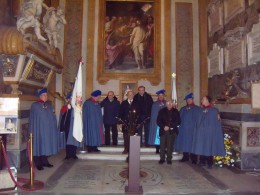 The presence of many friends, also came from other areas of the Two Sicilies, of several Knights of the Sacred Constantinian Order, the representation of other groups and southern movements, encourages us and gives us support. In the words of King Francis we salute you and say thank you and to everyone "shake hands with an outpouring of affection and gratitude ...".